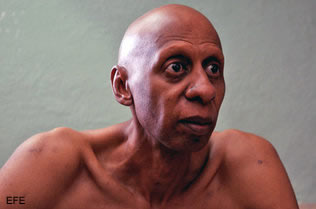 Guillermo Fariñas has got “a special vocation for martyrdom.” That’s what the Political Police officers, who constantly watch every step he takes since he decided to peacefully oppose the Cuban dictatorship, say. It is also confirmed by the numerous hunger strikes he has started since 1995. His last one began on February 24th as a protest for the death of Orlando Zapata Tamayo (another Cuban opposition leader who died from a hunger strike on that day). He is also demanding that the Castro brothers’ regime free 26 political prisoners whose deplorable health may turn them in to “other Zapatas.”

Guillermo “Coco” Fariñas (Santa Clara, Cuba, 1962) is a 48 year old psychologist and the director of Cubanacán Press —an independent press agency. He has been jailed in three separate occasions, for a total of 11 years behind bars, because of his ideals. He is the son of a nurse and an ex-military man who fought alongside Che Guevara in the Belgian Congo. “Coco” himself was a military cadet, a Communist Youth Union (League) member and a soldier who fought during Cuba’s war in Angola. He broke with the regime in 1989 as a consequence of the show trial of Cuban general Arnaldo Ochoa (who took the blame for the accusation of drug trafficking leveled against the Castro brothers). “Since then I have not been silent and I won’t be silent ‘till I die,” he told the Spanish newspaper El País a few days ago.

Fariñas, the director of Foro de Estudios Sociales Marta Abreu (Social Studies Forum Marta Abreu) and regional coordinator for the Liberal Democratic Party of Cuba in the central provinces, is not optimistic about the outcome of this latest challenge against the regime.  Nevertheless, and against the advice of close friends and associates, he’s decided to take it “to the end.” “The fact that you consider mine a necessary death is an honor to me,” he wrote to (Cuban dictator) Raúl Castro, whom he accuses of ordering his henchmen to let him die.

This entry was posted in Cuba and tagged Guillermo Fariñas, political prisoners. Bookmark the permalink.